With Plain Air, nine artists are invited to present artworks in the specific setting of a private backyard, responding either to the site or to the exhibition’s title in its widest sense, or both: Plain Air as in plain, straightforward/unadorned/simple, and air as in wind/broadcast/melody/ventilate. This unconventional venue, with its own identity, carefully looked after by its owner, Rick Hundley, is followed by the artists rather than captured. It is not plain nature, but rather a space defined, in the 1950s, as a “suburban backyard”, that is to say, an extension of the house, a space where one can relax, cook, entertain. Even though Plain Air is not conceived as a tentative of reunification with nature, it wishes to induce a certain awareness of it. Beyond activating what is here already, these at times small, at times grander gestures also generate new ideas, and connections appear, among the works themselves and beyond. In the dark foliage, Julie Alexander’s translucent fabric panel, hanging between two trees, stands and floats simultaneously. The glowing plane reminisces dappled light, which, according to the artist, roots in very ancient times our appreciation for pattern. Maikoiyo Alley-Barnes embraces the sculptural with a massive head made of found plastic that calls for an awareness of the spiritual sense of the place, may be for a ritual, reminding us that although the power of place is diminished in our society-sometimes it even is lost-, it continues to define culture and identity. David Horvitz’s and Nancy Brooks Brody’s works are also about connection. Brooks Brody’s duo of garden chairs moves every hour along an invisible grid, invoking a conversation, a square dance. Nearby a circle shaped mirror sits in the grass facing the sky. With this work Brooks Brody continues her investigation of dance and the body. In continuity with his investigations with music instruments and presence, Horvitz creates a glass bottle with two openings to blown into by two people facing each other to produce two parallel sounds. He is also sending an envelope with California poppy seeds to be planted during the exhibition. A different meaning of “air” interests Rob Rhee whose mantra, broadcast under the shed, is inspired by the transcription of several responses given to Alan Turing in the 1950s to the question “what would a robot gifted with artificial intelligence not be able to achieve?”. Falling in love or being kind were among the responses, a reminder of our humanness as well as a timely question to revisit. Francesca Lohman’s cast plaster lumps inhabit the grounds, stairs and nooks, revealing here their animistic tendencies and beautifully blurring the line between the container and the contained. A similar impression of a frozen organism is achieved through the human-sized photograph of Neal Fryett on the side of the house. By the brick wall, it is pulling its strength from the contrast between the elements used for the composition-some of them sourced in the garden-and the slickness of the print enclosed in its sealed celluloid cover. Dawn Cerny tackles with humor the threats embedded within the domestic: Her installation of tiny bright flags in the front yard are arranged in a pattern mimicking the situation when one person in a trio is left out-be it the father, the mother, the child, the sibling, the friend. Her other intervention, a colored form leaning on a cherry tree branch-a hybrid of branch, crutch and appendix-, is at times intimidating, at times laughable, at times elegant. Finally, Matt Browning’s dark diamond lattice felted cloth made out of wool is applied on an obstructed window. This labor-intensive, hard-to-decipher an-iconic square suggests, nay creates a void. Like several other works in the exhibition, but perhaps more so, it quietly mediates between us and our environment. Its unique fiber’s entanglement echoes the organic connections-of people and ideas-engendered by Plain Air. Each work here embraces the physical and spiritual dimension of the place. Plain Air is meant to be a moment of convergence, a time when our senses are solicited, a time when the consciousness of the place is temporarily activated, bringing different readings to it as well as participating in its history. 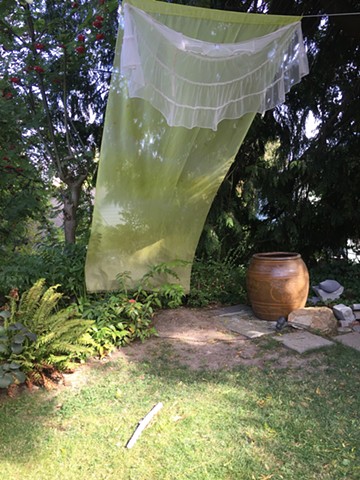 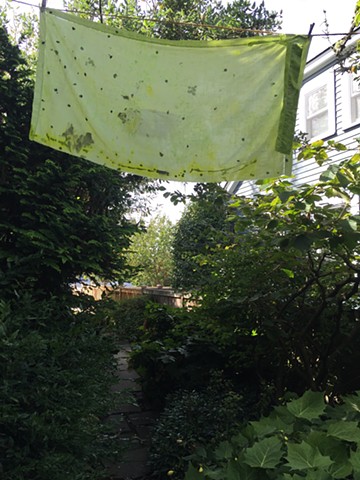 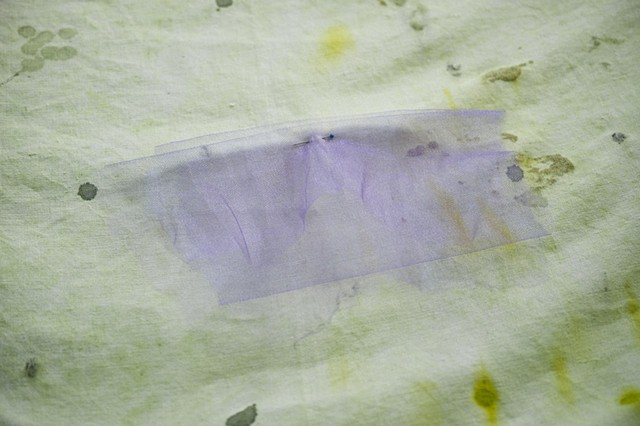